The angle grinder is one of the most versatile tools you can have in your tool shed, and I wouldn’t be without one.

As a DIY enthusiast for many years, I’ve used my angle grinder to cut paving slabs up to 50mm thick and form grooves in concrete blocks for plumbing and wiring jobs. I’ve also used it to smooth down filler on my car and then polish it to a perfect finish after spraying.

This guide draws on my years of experience to show you what to look for when buying a top-quality angle grinder. To help you further, I’ve shortlisted and reviewed my favourite three UK models. Read on to find out which of these three models wins our award for the ‘best angle grinder in the UK‘.

After extensive testing, here’s my list of the top 3 angle grinders in the UK this year. This model is my choice for the number one slot, although it’s a close call. The Bosch GWS 7 115mm angle grinder offers excellent value, being only slightly more expensive than the Makita. This solidly built angle grinder will last many years of regular usage.

This Bosch angle grinder has fantastic safety features such as restart protection, which stops the motor from starting up after the power has been cut off, and a safety switch to prevent accidental switch-on. The protective guard is fully adjustable and removable for grinding operations.

Specially developed air inlets cool the 720W brushless motor, and the labyrinth construction prevents debris from penetrating the motor, bearings, and gears. These features add to the motor’s longevity, making this Bosch angle grinder the best in terms of value for money.

The motor generates 11,000RPM, which is fast enough for general use and well within the maximum for most discs – yes, there is a top speed for discs!

At 1.9kg, it’s slightly heavier than the Makita but still light enough for long-term use. Although it’s larger and bulkier than others in its class, the Bosch has a neat flat gear head that makes it easier to get into tight spaces. 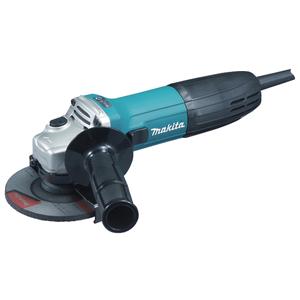 The Makita GA4530R is a corded 115mm angle grinder with a compact body and a side handle that’s slightly angled to provide better control.

The push-button spindle lock on the back of the head section makes changing the disc quick and straightforward. You can fit any compatible 115mm disc, and the guard is easily removable for use as a grinder or sander.

The Makita angle grinder doesn’t have variable speed control, but it does have a soft-start slide switch with a lock-on function to reduce user fatigue. This model also includes an anti-restart feature that prevents accidental start-up even when left plugged in.

To avoid excessive dust in the atmosphere, you can connect this angle grinder to the Makita vacuum cleaner through an optional dust-collecting wheel guard, which is much safer than relying on face masks.

I wanted to include a battery-powered angle grinder in this review, and the DeWalt DCG405N is one of the best cordless ones, but it’s also expensive. This DeWalt could have been my number one if not for its price and limited battery life.

So, what do you get for your money? The DeWalt DCG405N is an 18V compact tool with a 2-position side handle for easy handling, and at a mere 1kg in Weight – that’s the bare tool without the battery – it’s the lightest of the three under review.

Many tradespeople would take a DeWalt DCG405N on a job with them because it’s great for getting into confined spaces where you don’t have access to mains electricity or a generator.

This DeWalt model has a brushless motor, which is the main reason for the high cost, so it should last longer than similar angle grinders that are brush-powered. The powerful 18V motor has an output of 800W, which is very impressive for a battery-powered tool.

Being a 125mm diameter grinder, the DeWalt can cut deeper than the others – by a whole 5mm! Also, this model has an 18% larger surface area for grinding and sanding, making fast work of most jobs.

At 9,000RPM, this DeWalt is a lot slower than the others, but it’s fast enough. The electronic brake ensures a quick stop when the trigger is released, reducing the risk of injury, and the clutch mechanism prevents kickback when cutting – both excellent safety features.

The downside is that the battery tends to overheat when used for an extended period and runs down very quickly. You’ll need two or three 5Ah fully charged batteries for sustained usage.

The angle grinder gets its name because the disc/grinder is at a 90° angle to the driveshaft. Although some angle grinders operate on compressed air, most are electric, either battery-powered or connected to the mains.

Angle grinders are typically used for cutting rather than grinding, but their uses are limited only by the type of accessories available. You can use many types of discs that cover most cutting, grinding and cleaning jobs, but by attaching a rubber sanding plate to your angle grinder, you can easily convert it to a sander using standard Velcro sanding pads.

Read on to find out precisely what you can use an angle grinder for and how to choose the right one.

An angle grinder is one of those must-have tools in your collection. It’s helpful in so many ways, such as:

However, you won’t do all these things with the same disc, so let’s look at the types of discs on the market.

Cutting or grinding materials such as concrete, brick, and metal requires different discs. A softer abrasive disc will quickly wear down, reducing cut depth, so a diamond disc is better for cutting.

Some discs are flat, and some are raised in the middle. Flat discs are used for cutting, and the dished ones are best for grinding.

For general cutting, grinding and finishing, 3-in-1 discs are the best choice. These multi-purpose disks are relatively thin, between 1 and 2mm. This thinness makes them more liable to breakage if you apply too much pressure, which is inconvenient and dangerous. So when using these thinner discs, take it easy and let the disc do the work.

Cutting through dense hardwoods and wood that contains nails is possible using steel carbide-edged discs. Although expensive, these discs have a long life, and you can use them on many materials, meaning you don’t have to change the disc every time you switch from cast iron to concrete.

Diamond discs are great for raking out the joints in brickwork when doing a repointing job. The 8mm thick Draper 99796 is perfect for this, quickly removing the mortar to a depth of up to 30mm.

There are special discs for paint stripping made from honeycombed polyurethane and nylon. This construction makes them abrasive enough to remove paint and rust without damaging the original surface. These discs work great on boats and cars.

You’ll also see “flap” discs on the market, so named because they’re constructed from many layers of polyester material known as “flaps”. Abrasive grit is stuck to the flaps, which are then attached to a backing plate. Because of this layering, they’re solid and long-lasting compared to standard discs for cutting and grinding.

So, knowing what you can do with an angle grinder, let’s look at what you need to know before buying one.

Corded angle grinders for the DIY market run off 240v, but you can usually find manufacturers offering a 110v alternative for use on a building site.

Generally, corded power tools tend to be more powerful than the cordless equivalent, but power is not a significant factor when choosing an angle grinder. These tools rely on RPM to cut through steel and grind concrete.

Most cordless angle grinders are sold as bare tools, which means you’ll have to buy a battery and charger separately unless you already have compatible batteries for an existing device from the same product range.

Pro Tip: Buy two batteries, so a spare one is always fully charged.

Because of the speed angle grinders run at, they use up a lot of battery energy. Therefore, you shouldn’t consider anything less than a 5Ah battery.

Angle grinders come in 115mm, 125mm, and 230mm sizes. The larger one is more for the professional market, and the smaller ones work for most DIY jobs. Remember, the larger the disc capacity, the heavier the grinder, so pick one that’s right for you.

Pro Tip: If you want to cut a 50mm paving slab, it’s best to cut on one side and use a cold chisel to break off the unwanted piece. You can always smooth off the cut edge if necessary, but a rough edge gives you a better bond while leaving the visible cut edge neat.

Cheaper power tools include motors that use brushes to conduct electricity to the segments that make the shaft rotate.

Speed, measured in revolutions per minute (RPM), is quoted as a no-load speed. I.e. when the disc spins freely, without resistance. This speed reduces when you apply the disc to the material.

Angle grinders are typically 10x faster than a drill, so you get some idea of how fast these products rotate. However, unlike a drill, you don’t have much control over the speed. Either they’re spinning at full speed, or they’re not spinning at all.

Some angle grinders have variable speed settings, but for most, the best you can hope for is a soft start feature that prevents the grinder from reaching full speed immediately. It should also include an electric brake to immediately stop the grinder when the switch is in the off position.

Most angle grinders have a sliding thumb switch, so you don’t need continual pressure to operate it. While this makes an angle grinder easier to use, it does make it a more hazardous tool. Having an adjustable guard is a good feature, but you’ll have to remove it for jobs such as sanding and polishing.

The bigger 230mm angle grinders weigh around 6kg, with a typical length of 470mm. This extra size and Weight make them unsuitable for delicate jobs such as sanding or polishing.

For most DIY jobs, the 115mm and 125mm angle grinders are what you need. These angle grinders vary from 300mm to 370mm with a weight of 1.3kg to 2kg. All modes have a side handle for two-handed operation, making them easier to use, but some angle grinders have a better ergonomic feel.

The Bosch and the Makita are excellent corded angle grinders, but the Bosch has a brushless motor, which is more efficient and longer-lasting. If you’re on a tight budget, though, the Makita is a decent choice for the price.

If you’re looking for a cordless angle grinder, the DeWalt is the one for you, but be prepared to pay quite a bit extra, especially if you need to buy a charger and 2 or 3 batteries. Even if you already have these, the DeWalt cordless is still pricey.

To learn how to use this versatile product, check out our guide to cutting tiles with an angle grinder.