To avoid making a costly mistake, both in time and money, keep reading to find out which electric screwdriver is best for you.

In a Hurry? Here’s our Top Pick for the Best Electric Screwdriver UK in 2021: 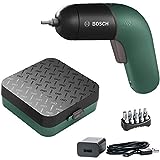 How to Choose the Best Electric Screwdriver UK

The best electric screwdriver for you will depend on what materials you’re driving your screws into, how often you will be using it and your budget.

To help you make the right choice, we’ve broken down the most important features to look for when buying an electric screwdriver.

Speed specifications are based on a no-load reading. We recommend looking for an electric screwdriver with a top speed of around 200rpm. Models with higher speeds will have greater torque and perform better on tough jobs.

Torque is a measurement of your screwdriver’s rotational or turning power. It’s measured in Newton-metres or Nm. The higher the torque, the more powerful your screwdriver’s turning ability will be. Torque is critical when removing stuck in screws or driving into tough materials.

Check the ampere-hour (Ah) rating of the battery, as this affects your runtime. The higher the Ah rating; the longer your screwdriver will last between charges.

However, higher Ah batteries also take longer to charge and are generally bigger and heavier. So, for ease of use and maximum manoeuvrability, we recommend models with 1.5-2Ah batteries that charge up rapidly in three to four hours.

Pro Tip: Double-check that your electric screwdriver has a battery indicator so you’ll never get caught by surprise. Colour-coded or multiple light indicators will keep you informed of how much run-time you have left.

Electric screwdrivers are compact and light, enabling you to get into tight corners with ease, particularly when assembling drawers or shelves.

Ideally, you’ll want a lightweight model not much bigger than the length of your hand. We recommend models around 300-450g as these will help reduce hand and wrist fatigue.

Often overlooked, work lights allow you to maintain your accuracy if your light source is weak or becomes obscured; such as when assembling cupboards or bulky furniture items.

Struggling to decide the best electric screwdriver for you? Read our in-depth reviews below to find your perfect match.

The 3.6V Bosch IXO Cordless Screwdriver has become a household staple over the years, and as expected, this latest version has surpassed its predecessor. As a result, it’s also topped our list and wins the ‘Best Electric Screwdriver UK‘ award.

When compared with the other models on this list, the main advantage of the Bosch IXO 6th Generation is its variable speed. Press or release the trigger for a faster or slower turn rate. This handy feature helps prevent splintering or over-spinning on screw heads.

With a max speed of 215rpm and up to 4.5Nm of torque, this lightweight electric screwdriver has plenty of power. Furthermore, the 1.5Ah Li-ion battery charges up in just 3.5 hours, so you won’t be without its power for long! 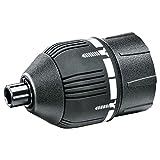 Complete with 10 driver bits, storage case, LED worklight and battery charge indicator; this compact electric screwdriver is one of the very best around.

Pro Tip: This model is compatible with add-ons such as the Bosch corkscrew or spice mill attachments. However, bear in mind that the drill attachment bit is not included.

The Ryobi ERGO-A2 provides a longer runtime than previous models, with a 1.5Ah Li-ion battery, charge level indicator and a fast three-hour charge time via a micro-USB cable.

With a no-load speed of 200rpm and a maximum torque of 5Nm, this 4V electric screwdriver has plenty of power. In fact, it can be a little overpowered for small screws and does not feature variable speeds (clutch chuck sold separately).

We particularly like the two adaptors (ERGO OFFSET and ERGO RIGHT ANGLE) that come with the Ryobi ERGO-A2. These adaptors are great for getting into tight spots that would otherwise require a manual screwdriver.

The Ryobi ERGO-A2 has a comfortable ergonomic soft-grip handle and a powerful LED work light. It also includes a 10 screwdriver bit set, a storage case and a micro USB charging cable. This model also comes with Ryobi’s standard 3-year warranty.

Small, lightweight and compact, the Ryobi ERGO-A2 is ideal for getting into tight spots, assembling flat-pack furniture and carrying out general repairs.

This 3.6V model from Makita comes complete with an 81-piece accessory kit, including an extension bit holder for those hard to reach spots.

While this model has a 220rpm top speed, its maximum torque is just 4Nm, making it less powerful than the other models on this list. The Makita DF001DW’s other main drawback is its lack of speed control, leading to stripped screw heads, especially when driving smaller screws.

Its Li-ion battery capacity of 1.5Ah is in line with other electric screwdrivers, and it charges up anywhere between three to five hours, making it ready to go with little notice. But, annoyingly, there’s no power indicator showing how much charge you have left!

The Makita DF001DW is a solid electric screwdriver that won’t let you down. However, the other models on this list have more features, greater torque and come with a lower price tag.

Our overall pick for the best electric screwdriver UK is the Bosch IXO 6th generation.

Lightweight and compact, this remodelled classic is extremely easy to use, making it perfect for use around the home.

Its main advantage over its competitors is its variable speed control which helps prevent damage to screws and furniture alike. We also like its fast 3.5 hour charge time and compatibility with Bosch’s home attachments add-ons.

P.S. To learn more about other drills and drivers, check out our complete guide to the 9 types of drills & drivers.