As an architectural technologist, I often inspect old houses on behalf of potential buyers. In many cases, the first thing that hits me as I enter the house is the smell of damp.

As I walk through these old houses, I soon notice the visible signs of damp – dangerous mould growth on the walls and ceilings. Some homeowners try to hide the mould by papering or painting over it. However, you can’t hide mould for long; if left untreated, the spores will land and grow again.

After many hours of research and testing, here are our top three picks for 2023:

Ronseal Anti Mould paint uses benzisothiazolone to kill off bacteria and fungal spores to ensure mould doesn’t come back in a hurry – for six years, to be precise. Because of this, gloves are best to prevent allergic skin reactions.

It has a coverage rate of 13m2/l when using a brush or roller, requiring two coats to achieve a good, hard-wearing and easy-to-clean finish. It will take a couple of days to complete most jobs with four hours of drying time.

On the tin, it states, “Don’t paint over our anti mould paint with any other paint as this stops it working”. Although many people ignore this warning, I wouldn’t recommend overpainting. 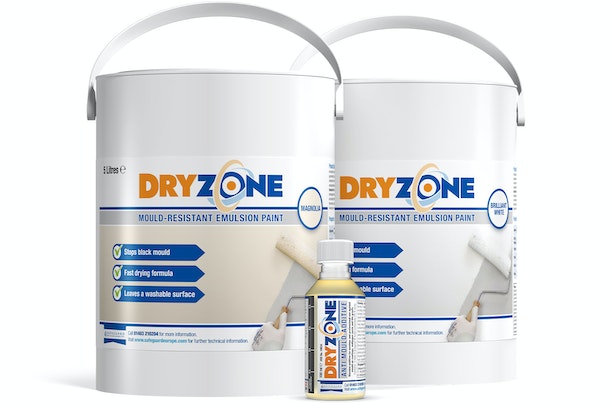 Dryzone contains a biocide to prevent mould from growing on the surface. This unique ingredient blocks the recurrence of black mould for up to five years.

Apply two coats of Dryzone, leaving two to three hours between coats, using a brush or a roller. The soft sheen finish is washable and moisture resistant when thoroughly dried.

Dryzone’s anti mould paint is available in brilliant white and magnolia, but it can be over-painted using an emulsion of your choice.

Dryzone also makes an anti mould additive for paints, tile grout, and wallpaper paste to give them the same mould-resistant properties. The biocidal base will resist mould growth for at least three years. Polar Dampseal differs from the other two products in that it uses synthetic resins – known as Pliolites – that gives it a higher resistance to damp within minutes of applying. These resins allow Polar Dampseal to be used on damp surfaces or in areas subject to condensation soon after application.

Being solvent-based, it’s higher in VOCs than water-based products, so only use it in well-ventilated rooms. Remember to wear gloves and eye protection when applying this paint. You should also wear additional PPE if the room is lacking sufficient ventilation.

Polar Dampseal requires only one coat, and a 500ml tin will cover up to 2m2  (it’s also available in 1-litre tins). It’s touch dry in two to three hours and can be over-painted after 16 to 24 hours, although you can leave it as a finish coat if you’re happy with matt white or magnolia – the landlords’ favourite.

You can apply Dampseal with a roller, but a brush is better for a smooth finish because it contains Portland cement, which leaves a slightly textured look.

Dampseal also acts as a stain-blocker if you’re just looking to paint over water-damaged surfaces.

We used four aspects to distinguish the best from the rest.

Some paints have a strong odour, restricting their use to only well-ventilated spaces. This restriction is not practical, as mould flourishes in rooms lacking ventilation.

The surface area a tin of paint covers significantly impacts the cost/m2.

How long does the paint last before repainting is required?

This decision was a close call. In the end, Ronseal won because it’s less expensive than Dryzone (around 25% cheaper), its coverage is better, and the claimed lifespan is longer than its competitors.

It’s a pity that Ronseal only has one colour, and you can’t over-paint it. This restriction means tough luck if white doesn’t work for you.

Polar Dampseal is a very effective anti mould product, and if I were looking for something to cover a small area, perhaps as a stain-block, I would use it. However, the high VOC rating pushes this product to the bottom of our list. Check out this Centre for Sustainable Energy article to learn more about mould prevention.