Increasingly eclipsing the less practical circular saw, the spring-mounted circular blades on plunge saws are ideal for precise and consistent cuts through the hardest woods.

However, with so many plunge saws on the market today, it can be tricky to choose the best model. After testing the UK’s most highly-rated products side-by-side, we determined that the best plunge saw is Evolution’s R185CCSX.

Taking a left-field approach to this niche market, the R185CCSX is less of a true plunge saw than our other shortlisted contenders. However, it still offers the practicality and versatility of a plunge saw. It’s also cheap, comprehensively equipped, well-regarded and surprisingly lightweight.

After many hours of research and rigorous testing, these are our favourite plunge saws on the UK market, starting with a worthy test winner: On paper (or on-screen), it’s hard to see why Evolution’s R185CCSX is so much cheaper than the other products on our list. It weighs about the same as the Triton and has considerably more power than the Lumberjack. It offers the key benefits of both but without their drawbacks – a win-win!

It’s certainly difficult to argue with Evolution’s specifications. Weighing just 5.1kg and supplied with a 185mm TCT blade capable of slicing through wood with embedded nails, its high-torque 1600W motor is equipped with an electric brake capable of stopping rotation within a few seconds. It can be tilted to 45 degrees, with a 64mm maximum cutting depth, easily beating the Lumberjack.

When you start studying the R185CCSX’s specifications, its affordability makes sense. The track is a modest 1020mm in length and comes in three separate pieces, which might be insufficient for bigger jobs.

Although there’s a dust extraction port, it’s less flexible than the Triton. Most significantly, the Evolution lacks the extensive parallel edge guide, which helps with edging cuts.

The R185CCSX is a circular saw on rails rather than a traditional plunge saw, which might be an issue for some buyers because it lacks the retractable blade guard found on plunge saws. These guards enable smooth edging cuts, reduce dust exposure, and simplify cutting depths.

Named after its wattage, Triton’s TTS1400 is a relatively stylish piece of equipment with an apricot chassis and a semi-cylindrical soft-grip handle suitable for left or right-handed users.

Drawing on 45 years of manufacturing experience, it’s a robust plunge saw with many valuable features, including a 60mm cut depth.

The Triton is the only plunge saw on our list to feature a dust extractor port with 360-degree rotation, which will benefit anyone with chest issues. The dust extractor helps you follow precise lines along the workpiece, while an anti-kickback feature complements the non-slip rubber grip.

The 1400W motor produces speeds ranging from 2000 to 5500rpm, while its soft-start function and overload protection should reduce the risk of anything untoward.

One of the few black marks against the TTS1400 is the absence of a track rail. The track rail has to be purchased separately, and rails from other manufacturers are incompatible. However, this model has a 48-degree bevel range – the highest we tested. The Triton is also safe, with the power switch locking during blade changes.

Last but not least, the TTS1400 comes with a 165mm TCT blade and onboard tool storage. 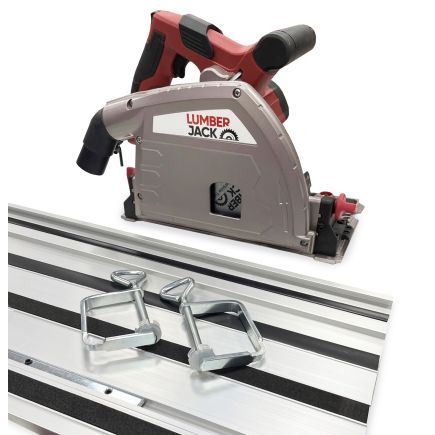 Lumberjack’s offering is the undisputed heavyweight of our comparison, weighing in at seven kilograms! That’s two kilos more than the other products on this list, making this a poor choice for the faint-hearted or weak-wristed. That said, the PS165 sits on a durable cast aluminium base – unlike the Triton, it comes with two 700mm sections of extruded aluminium track. This track offers a non-slip base and low-friction glide strips with two clamps.

Everything you need to start cutting comes out of the box, including a standard blade you may want to upgrade.

At a modest 1200W, the Lumberjack is down on power but remains powerful enough to slice through solid timber all day.

The over-moulded main handle sits beside a trigger and separate plunge release control, while a prominently positioned speed adjustment dial can raise the rpm to 5200.

There’s no dust extraction system on the PS165, and it loses a few degrees of adjustment compared to the Triton at 45 degrees. Also, its 55mm cutting depth isn’t the deepest on our list. On the bright side, the supplied 700mm track sections are extendable with third-party tracks from manufacturers such as Festool.

The criteria below shaped our choice when choosing the best plunge saw in the UK.

All Plunge saws work the same way, but their capabilities vary by product. For instance, asthmatics and people with allergies should look for a machine with a dust extraction port capable of connecting to a vacuum. Not only does this minimise irritants in the air, but it also ensures timber particles can’t obscure cut lines. Ideally, look for a dust extraction port that rotates through 360 degrees, reducing the risk of disconnection as you move the plunge saw around.

Other criteria to look for on the spec sheet include the machine’s wattage, which determines how powerfully it’ll slice through harder woods. You also want a blade of at least 165mm, ideally with tungsten carbide tips (TCT) for effective slicing.

Speaking of slices, the tracks which plunge saws ride along tend to come in several pieces. The fewer parts you have to assemble before running a plunge saw down them, the better. And in terms of cutting depth, anything over 50mm should be sufficient – our candidates range from 55mm to 65mm.

One of the key benefits of a plunge saw over a circular saw is the track it can travel along. Two of our shortlisted products come with tracks as standard, though Triton bucks the trend by making you purchase a track separately. Tracks tend to be manufacturer-specific, though Festool tracks can sometimes dovetail with other saw brands.

It’s also worth noting that manufacturers or retailers refer to plunge saws as track saws, but there’s no distinction between them. The Evolution plunge saw we reviewed above is described as a ‘circular saw and track’. You’d be looking at an entirely different market without those last two words. Still, the Evolution rides on a track, making it indistinguishable from a conventional plunge saw.

If you were thinking about making do without a track, this ProTrade blog explains the benefits of investing in a guide rail for your plunge saw.

Although it’s possible to purchase cordless plunge saws, we recommend the peace of mind provided by mains-powered hardware. Mains power is still the dominant method of powering plunge saws, as even the lithium-ion batteries supplied with high-end cordless devices tend to have a limited running time.

It’s also worth noting that these machines are heavy objects, so you don’t want to add any extra bulk. A typical cordless plunge saw will tip the scales at five kilos without a battery.

Do I Need a Plunge Saw?

A plunge saw is a specialised device you may not need if you consider all options. If you’re unsure whether a plunge saw is suitable, our review of the 21 types of saws will help you decide.

Plunge saws are easy to get to grips with, so you won’t find complex user guides bundled with any of our shortlisted products.

Two of our three selections come with everything you need out of the box, including a track and a blade. If your plunge saw doesn’t come with a TCT blade as standard, it’s worth upgrading to one, ideally between 165 and 185mm in diameter. This YouTube video explains the importance of choosing the right blade and installing guide rails where necessary.

It’s easy to rule the Lumberjack out of contention for the title of ‘Best Plunge Saw’ in the UK. While it’s 1400mm track and out-of-the-box practicality make the PS165 a worthy purchase in its own right, it lacks desirable features found on the other products we’ve tested. For instance, it doesn’t have a dust extraction system and its 7kg weight counts against it. And although it’s not the most expensive product we’ve tested, it’s hard to see what you’re paying for compared to our cheapest option.

Splitting the Triton and Evolution is more complicated. The Triton would perhaps be the purist’s choice – a conventional plunge saw with handy built-in storage and convenient soft-start function. However, the Evolution R185CCSX is cheaper, cuts deeper, and comes with a track. If you can forgive the missing side plate and its less comprehensive dust extraction system, its lightweight and significantly lower price tag represent compelling benefits. It’s our winner – but only just.