Double-glazed doors improve your home’s energy efficiency because they trap heat and seal out cold. However, your doors are only as good as their hinges, and it can be difficult to understand the different types of uPVC door hinges.

I spent plenty of time researching uPVC door hinges when I fitted my first set of uPVC patio doors, and luckily, I can pass on my learnings to you. So, strap in as we take a tour through the fascinating world of uPVC door hinges. It’ll be fun, I promise!

There are three types of uPVC door hinges: the butt, rebate, and flag hinge, but what makes them different? Let’s look at each one to determine which type you need.

Butt hinges are the most common variety for commercial and domestic properties. They consist of a fixed section that contains the pivoting hinge. This hinge attaches to the door jamb and a leaf that screws into the side of the door.

Due to their shape, butt hinges are sometimes called pencil or cylinder hinges. Traditional butt hinges differ from uPVC versions because they have two matching leafs that close flat on each other. However, the principle of the uPVC butt hinge remains the same.

Fun Hinge Fact: The oldest known hinge dates back to 1600 BC and was found in Turkey.

Some call Rebate hinges ‘butt hinges’ because they share similar features like the cylinder knuckle that houses the hinge pin.

The leaf part of the hinge differs because it wraps around the door sash, making a more snug fit against the door frame.

If you value security (who doesn’t), this hinge is the one to pick. The leaf is concealed inside the door frame rather than sitting over it.

Fun Hinge Fact: Archaeologists have discovered hinges in ruins dating back to ancient Egypt and Babylon, and the Romans even used them on cabinets and storage units.

A flag hinge consists of a knuckle containing the pin and a pivoting flag-shaped leaf.

Unlike the other varieties, a flag hinge sits on top of the pin and pivots like a flag on a pole. They’re sometimes called flap hinges for obvious reasons.

Flag hinges are more vulnerable to attack because the hinge has an exposed element when the door is open 90 degrees. However, they’re the most adjustable hinge type. If security is high on your agenda, maybe stick with butt hinges.

Fun Hinge Fact: Some high-end Roman armour had hinges to make it easier to get into or remove, which is ideal if you need a toilet break between battles.

We live through turbulent times, and energy prices are part of almost every conversation in the media. Whether it’s about saving the planet or trying to keep our homes warm, improving energy efficiency is a smart move.

To learn more about why you should replace your uPVC door hinges, check out the video below: 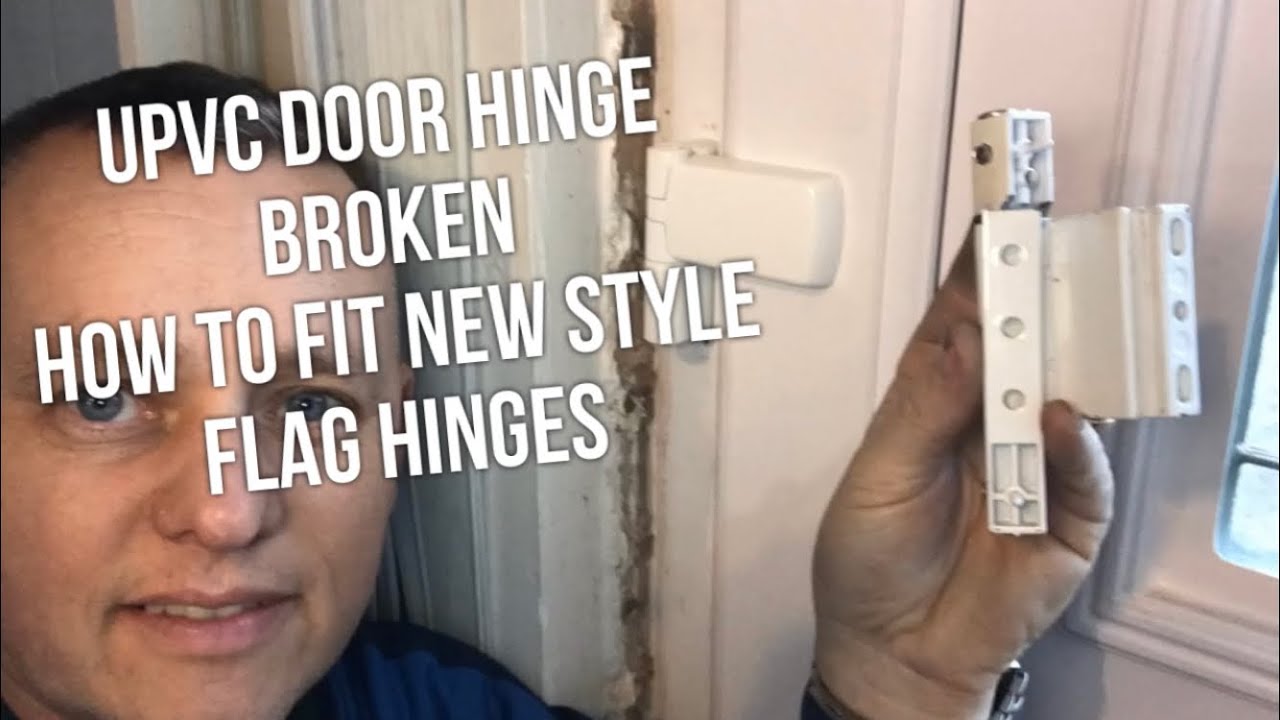 Your uPVC door is only as good as the hinges holding it in place. Your home will leak heat and energy faster than a colander if you poorly install the door. The same is true when there are gaps between the frames and walls.

By fitting new hinges, you can reduce energy usage, keep your home at a manageable ambient temperature, and minimise maintenance costs. You also save money by giving old and tired doors a new lease on life.

Find a trusted double glazing company on Rated People if you lack the skills to install new uPVC doors and hinges.

Security is another reason to install new uPVC door hinges. Most doors come with a deadbolt locking system, which means the door has three bolts instead of one. The bolts activate when you lift the door handle upwards and turn the key.

However, if your hinges have broken or need replacing, it doesn’t matter how good your deadbolt system is; that tired hinge is a security risk!

Regarding security, don’t forget to factor in the type of door handle you’ll need. Handles are as vital as hinges in securing your home.

The Fenestration Self-Assessment Scheme was introduced in 2002 to improve window and door industry standards.

FENSA is the trade body that issues certificates to prove that the work is energy efficient, complies with building regulations, and is registered.

If you’re making improvements to maximise sales profit, get a FENSA certificate.

You need a FENSA certificate for any door and window replacements carried out after the 1st of April 2002. You cannot sell your house without one.

How Much Does It Cost to Replace a uPVC Hinge?

Door hinges typically cost between £15 to £30 each, so they’re not expensive.

However, only attempt to replace door hinges if you know what you’re doing. If you get it wrong, you could compromise the security of your home and make your insurance null and void.

You might want to replace the entire door rather than the hinges. You can buy doors for £250 to £380 and fit them yourself, but getting them right requires skill and knowledge.

If you hire a professional door fitter like the tradespeople on Rated People, you can expect to pay on average £1,695 plus V.A.T. This price includes the door, hinges, labour costs and guarantees.

While the selection of uPVC door hinges is limited, choosing the right one is crucial if you want your new doors to be energy efficient and secure. Remember, a new door is only as good as its hinges.

To learn more about the other ten essential hinges, check out our ultimate guide to the top 10 different types of hinges that every DIY enthusiast should know.

What are the different types of uPVC door hinges?

There are three uPVC door hinge types: rebated, butt and flag. Rebated and butt hinge offers the most protection from a security perspective.

How do you adjust uPVC door hinges?

You can adjust door hinges by using an Allen key. Insert it into the hex bolt with the door closed. Turn it clockwise once or twice, and then test to see if the bottom of the door still catches the frame.

Keep adjusting until you achieve the desired result.

What are the three-door hinge types?

The three uPVC door hinge types are; rebated, butt and flag. The rebated hinge is sometimes called a rebated butt hinge, and sometimes the flag hinge is called a flap hinge. Some call the butt hinge a ‘pencil’ or ‘cylinder hinge’.

What is a uPVC flag hinge?

It’s a hinge with a flag-shaped leaf that pivots on a pin protruding from the cylinder. It looks like a flag on a pole, hence the name.