Jack plane vs smoothing plane – what’s the best? If you only wanted one plane, which would you choose? I faced this dilemma several years ago when I tried to plane off the bottom of a door that was catching on the new carpet.

Each plane has pros and cons; usually, it’s the job that dictates the right tool to use. But I’ve found over the years that the jack plane is the best if you only want one plane in your toolkit. Why? Read on to find out.

I was once asked, “What’s the difference between a jack plane and a smoothing plane?” and I flippantly answered, “about 100mm.”

A plane’s underside is called the sole (as in a foot) and is measured from heel to toe.

The sole is part of the cast iron body, which constitutes the bottom section of the plane and the thing that holds everything together. The body’s length and width determine the plane’s best use.

A jack plane typically has a body of 50mm wide x 355mm long, making it ideal for shaping flat wooden surfaces such as a tabletop.

A smoothing plane is much smaller in length, typically 250mm – hence my answer to the question – so this is much better at finishing a piece of wood.

So, let’s delve a little deeper and talk about other differences. To demonstrate this, I’ve chosen two planes from the Stanley range – the no.5 jack and the no.4 smoother.

There are several common characteristics I will go into later, but for now, below is what makes the jack plane so good at shaping wood.

This is why the smoothing plane is excellent for finishing a job:

All planes have the same essential components (see diagram above). The Stanley jack and smoothing planes share these standard features:

Check out the video below by Rag ‘n’ Bone Brown to see how all these elements fit together and how to maintain them to keep your plane in tip-top condition. 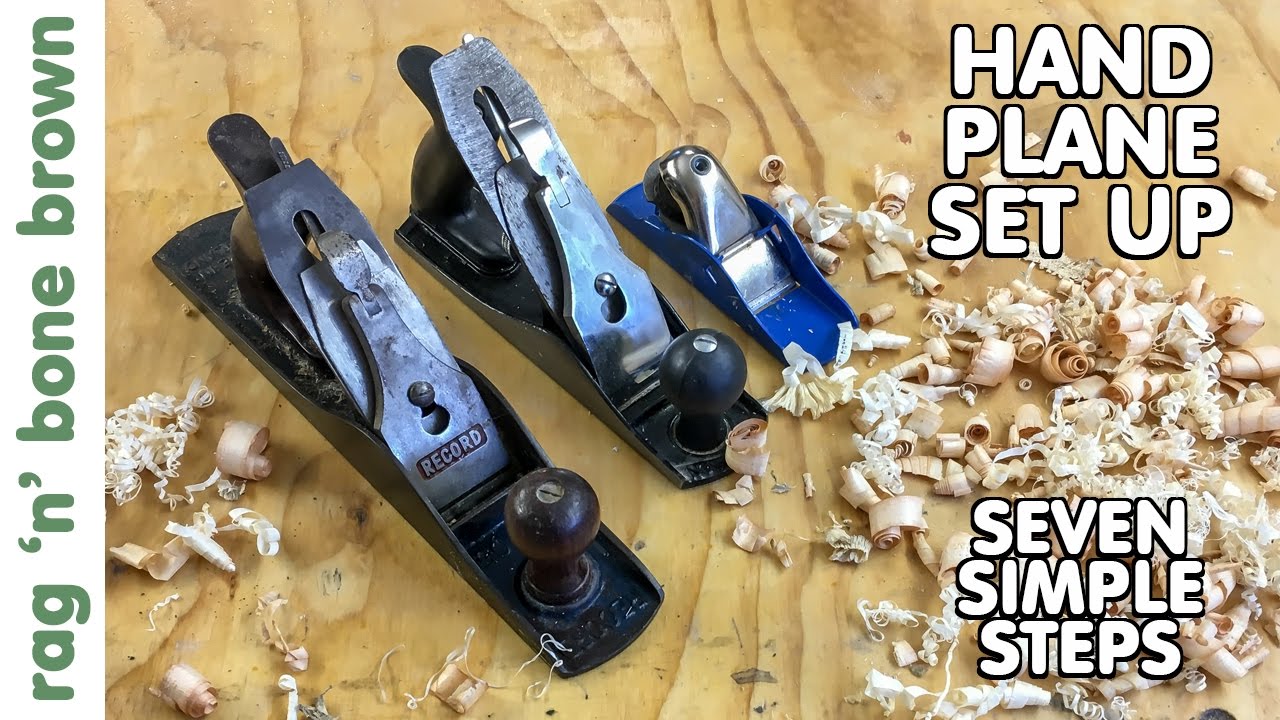 More About the Blade

The blade is the most critical part of a plane. You won’t get a nice finish if this isn’t honed or sharpened right. Although many manufacturers refer to the blade as an iron, most are made from tempered high-carbon chrome steel.

Bevel Up or Bevel Down?

This choice depends on how you intend to use the plane and the type of frog fitted. For virtually all bench planes, the blade is fitted with the bevel pointing down, so the cutting angle with a standard frog is 45⁰ to the work surface.

Most blades have a 25⁰ primary bevel, but I recommend honing a secondary bevel at 30⁰ to add more strength to the cutting edge. With this configuration, the angle between the bevel and the wood is between 15⁰ and 20⁰ – ideal for most wood types.

However, there are occasions when you might need a lower cutting angle, like when working on end grain or wood prone to tear-out (where the fibres aren’t supported by the fibres around them).

This is where planes fitted with a 12⁰ frog come in, requiring the blade to be fitted bevel up, providing a cutting angle of 37⁰ (12 + 25).

Many professionals prefer the low-pitch bevel-up planes because of their versatility – you can use them on all types of wood and all grain directions.

None of the above will make a difference to your craft if you don’t look after the blade’s cutting edge. You should be able to use your plane straight out of the box, but with some cheaper models, you might need to hone the blade to get that razor-sharp edge.

Let me explain the difference between sharpening and honing. Sharpening entails removing material from the blade using a ceramic or diamond grit whetstone. Honing realigns the cutting edge using an oil or water stone block.

Frequent honing is necessary if you use your plane a lot, and you will also have to sharpen it periodically, especially if you’re using it on knotty wood like spruce. The test is to cut a piece of paper without having to hold it taught. If the paper moves without cutting, the blade isn’t sharp enough.

If you want to know more about sharpening a blade, there’s a helpful section in our guide to the best wood chisels in the UK. The same principles apply to plane blades.

You can use a jack or a smoothing plane for many tasks, but one always fairs better than the other in most cases. I’ve tried to compare the two in this table, scoring out of 5 for each task.

It’s very subjective, of course, and much depends on how you set up the plane, but this explains why I prefer a jack plane to a smoother.

Both the jack and the smoother have their pros and cons, but as a general guide, consider the following:

If you only wanted one plane, what should you choose? I would go for the jack plane for the reasons below. As the name suggests, it’s a “jack of all trades”!

What do the numbers mean on a plane?

These are model numbers introduced by Stanley, one of the pioneers in metal plane design, in January 1870. The smallest plane is a no.1, but it doesn’t necessarily follow that the larger the number, the larger the plane.

The chart below covers the most common sizes for jack and smoothing planes.

Which plane is best for shaping wood?

A number 6 jack plane is good for large surfaces such as table tops because of the sole’s size and the blade’s width. If you’re shaping smaller pieces such as posts or skirting boards, a 5 or 5½ jack plane would be easier and lighter to handle.

Which plane provides the smoothest finish?

A number 3 smoothing plane will get you a fine finish on any piece of wood, but for sections thicker than 40mm, a 4 or 4½ plane would be better. The extra width of the blade would take off more material for the same amount of effort.

Why do planes have blades at different angles?

The standard angle for a wood plane is 45⁰, but you can get planes set at 12⁰, 50⁰ and 55⁰ angles. The “frog” determines the angle.

Note: The frog is the metal block fixed to the plane’s body, which holds the blade assembly. On many planes, the frog is removable.

Planes set at 12⁰ are better for planning across the grain or on the end grain. Planes with 50⁰ and 55⁰ frogs make smoothing easier, especially on more challenging pieces of wood such as hardwoods.

Can I form rebates with a jack plane?

Jack planes (and smoothing planes, for that matter) have blades set at 5mm from each edge of the body, so they can’t get close to upright sections of timber. For rebating, you need a special plane designed for that purpose, like the Fillister plane. See this Paul Sellers video for more information.

Is the blade of the jack plane different from that of a smoothing plane?

Smoothing planes have a slightly cambered cutting edge, so only the tip of the blade protrudes through the mouth of the plane. This helps when smoothing out high spots in the wood.

Jack planes have a straight cutting edge to take off more wood when shaping the piece or getting it square and flat. The blades have rounded edges to prevent leaving tracks on the surface of the wood.

The blades are interchangeable, so if you only have one plane, you can convert a jack to a smoothing plane for certain tasks.

How easy is changing the blade on a jack or smoothing plane?

Both types of planes have the same mechanism for changing the blade. It’s a simple task of flicking the lever on the lever cap and removing it, taking out the chip breaker and blade assembly, and unscrewing the blade. You can then hone or sharpen the blade before reversing the process to reassemble.

Check out this Paul Sellers video for more information on sharpening and setting the bench plane.